Today, April 17th marks the first anniversary of the passing of our dear friend - Dr Jeremy Chuah. His passing was a shock to his friends, patients, associates and family.

I remember clearly, when hubs told me the news, I was driving to pick up Amber. I just froze and was lost for a moment, keep telling myself it's not real, it must have been a mistake. It was not a mistake but a clear big loss to those who know him.

He and hubs were long time friends, going way back, long before I met hubs. When hubs wanted to officially 'date' me, he arranged a dinner to introduce me to Jeremy and his wife. I remember the evening clearly, 4 of us digging into honey crabs at Restoran Istimewa along Jalan Cheras.

He is a very nice person and doctor. No matter how busy his schedule was, he'll always put on a smiling face and his pleasant disposition left a lasting impression on his patients as well.

He attended our wedding reception and gave hubs and me a big hug. He was very happy to see hubs finally married and settling down.

From a friend, I became his patient. He was with us in our conception journey, always giving me the most pratical advise. Those that I remember clearly was :

- do not eat so much, control your weight. high sugar level will affect fertility
- do not take any raw food or salads, the risk of contamination is high
- no bak kut teh or dong quai
- no cooling chinese herbal tea
- take normal, healthy, diet of properly cooked food

I had a miscarriage once and he did not know how to break the news to me. He felt so bad and looked so blank and just said : don't put too much hope, give it another 5 days. I knew then it was bad news.

When I was finally pregnant again with Amber, he was very happy for us and said : Come, come and see me..

I had a craving for McDonald's ice cream while I was pregnant. He said : It's okay to take one or two but not everyday, imagine accumulating 100 ice cream cones and converting them to fat, can you imagine the amount of fat accumulated ? *blush*

He was a gentle doctor during my delivery. Amber was induced and he tried all methods of induction from the most natural before progressing to pitocin drips when all didn't work. He advocates everything to be as natural as possible, from conception to pregnancy and delivery. What I'm trying to say is his patient's interest will always be priority above anything else.

He also took our first family photo after Amber's delivery.

When Amber had a bad fall and lost a tooth, he knew hubs and i was very down over the incident, he texted a consolation message : Ha! ha ! Parents more painful than kid.. children rarely scar, so don't worry. I kept the sms till today, a reminder of a friend I will no longer receive sms from.

Dr Jeremy enjoys wine and we had many memorable wine tasting sessions together. There has been odd occasions of being his friend/patient. During dinners or events at his home, he don't treat me like officially like a patient nor a close friend. He'll just be very casual to ask : Do you want wine ? Oh you can't have wine, let me make you a tea instead ... 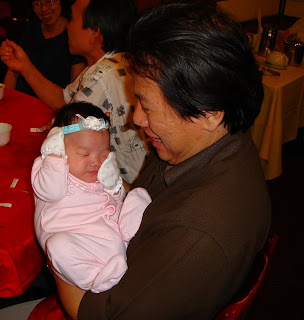 Dr Jeremy with Amber at her full moon party.

He was a wonderful father. I think patients will know the affectionate tone in which he talks to his kids when they call. He holds his daughter's hands when they walk, clearly showing a very close and affectionate relationship between them

When he left, his family lost a mentor, guardian and man of the house, his staff lost an irreplacable considerate boss, his friends lost a concerned confidante. He left a huge void in our lives. His funeral was the longest procession I've seen. Many and all were in tears bidding him a final goodbye.

It's been a year and we all remember him fondly. He has taught us to live simply and be happy always, you never know what comes tomorrow.

Although Amber was too young to remember him and only met him once just before he passed away, we tell her she was delivered by Dr Jeremy, so any mention of him now, Amber will say : Uncle Jemery pass away liao.. kuo beh teow liao (cannot see him already)..

Somehow she cannot get his name right. It's always JE-ME-RY instead of Jeremy. *sigh*

May he rest in peace and god bless his soul. He will always be remembered and missed by many lives he touched and thousands of lives he brought to the world.