She asked to go a playground where she could climb the ropes.
We scratched our heads and cannot remember which playground had the ropes and Daddy took us for a long ride and after 2 searches.. we found the playground at Ampang Hilir that has the rope pulley.  That really shows we lazy parents hardly bring her to parks.
Last Sunday, Daddy took her to the playground and assisted her in her play. 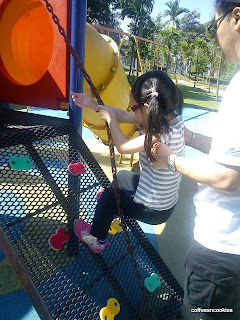 climbing up the ropes.. 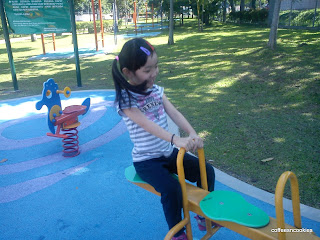 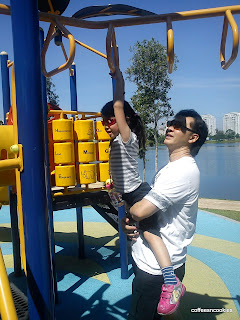 One Step At A Time..

Close friends knew I had some issues with my kid, her school and childminder recently until we hired a home helper.
We've been spending more time with Amber since our helper came on board. More quality time, that is, going to the park, reading, watching movies together and basically just activities together with here as opposed to previously, spending time together was being together but doing different things, hubs with his work, me with my endless housework and she, screaming for my attention by doing things that annoys me and what should have been a beautiful evening together turns out like a volcano erupted.
Jaclyn sent me an article that Mamapumpkin wrote.  I got hubs to sit down and read the article, line by line, and we both agree we have done more wrongs than rights and we could do a lot better rights moving forward. This article was an awekening for us. Nobody said parenting was easy. Scolding and caning is bullying. If we don't make it right now, we'll pay the price later.
We make changes, a little at a time. I take responsibility for primary care, ensuring she is fed, clean and comfortable while hubs steps in on situations that calls for a stern voice. We practised.. no shouting.. but firm reminders, over and over again.
Baby steps.. we'll get there.
Posted by coffeesncookies at 8/29/2011 12:05:00 PM

Manuka Honey Is Good For You

I went on a Manuka honey buying frenzy today. Isetan KLCC had a special offer for only RM99.95 per jar of Manuka Active 20+. The normal price is RM158 and I took opportunity of this good buy to stock up !! Everyone was buying a few jars each and I think this is a good testimonial on the goodness of manuka honey. 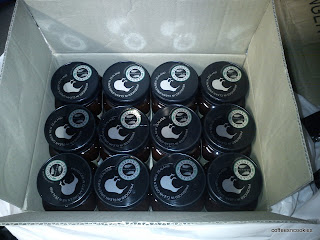 Amber is a fussy eater and always lack of appetite (being allergic to the egg, dairy and yeast makes her situation worst, lack appetite and lack of food choice, sigh !!). My sister in law advised me to give Amber 2 spoons of Manuka honey daily. I find it helps to improve her appetite and keep her healthy. I was a bit under the weather recently, I took a scoop of undiluted Manuka Active 20+ and  I feel energized almost immediately :D 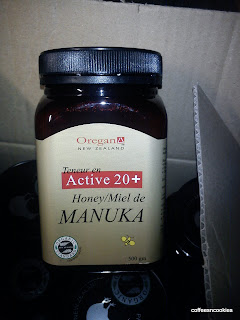 You can get more information on Oregan Manuka Honey from their website. Open the jar and you can see very 'active' honey, smells good and tastes great. Manuka doesn't leave a strong sweet aftertaste like other honey but if I have sore throat, I take a scoop, undliluted,  I can feel the undiluted manuka honey  'arresting' my throat, as if the antibacterial properties are working at healing the infection. 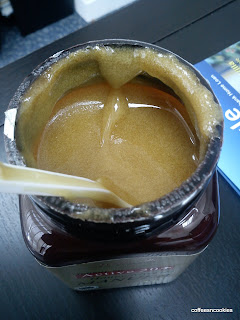 Lor mai kai is our family favourite and I always have a stash in my freezer, for just-in-case occasions when Amber is hungry and wants a little bite.
Since she is only allowred very limited food due to her allergy condition (no eggs, dairy, yeast and fungus, including mushroom), I try to suit her palate and cook extra of her favourites.
I have a very simple lor mai kai recipe : 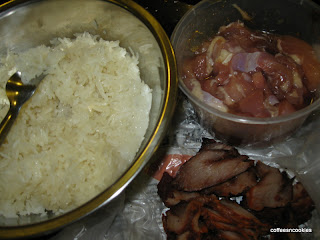 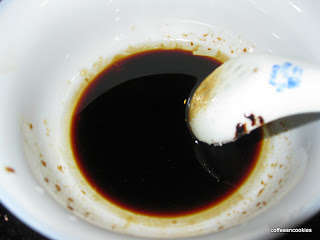 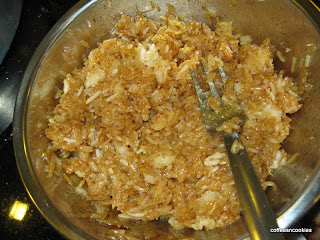 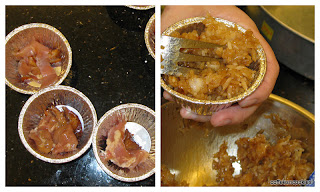 Place a slice of chicken and char siu over aluminium cups and top with premixed steamed glutinous rice
Steam over rapid boiling water for another 30 minutes.
Tadaaaa ....... 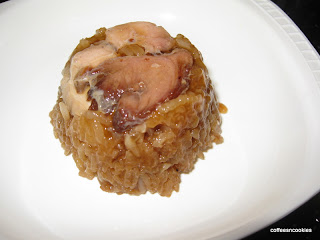 Labels: I LOVE TO EAT, meals-Amber

Amber's on Mamy Poko every night. Blame it on the lazy mom and dad's whose too lazy to move our butt to wake her up to wee wee.  However, lately, she's been waking up at 2am or 3am to go toilet.

By morning, her diaper is dry. We reward her 80 sen for every dry diaper. I gave her the liberty to choose what she wants to buy with her money. She bought a 'chop' . ie rubber stamp from Populars and she's saving more to buy Wrigley's chewing gum :D

I hope she keeps it up and be confident enough to go diaperless soon :D

Sorry for kissing your butt!!

Something really stupid happened today. I had to be out of the house for some reasons and I had no idea where to go. In my mind , I wanted to go for a facial but have no a place in mind. I called hubs to chk tomorrow's schedule, if we were gg Ikano and if we were, then I wouldn't go there today. My mind was hazy and while plugging on my handsfree at a stop junction, I didn't realize my car was not in complete stop, still in D mode.

I kissed the butt of a black Perodua!!

S*** !!!!! We both got down and the driver was a middle aged lady. I apologized profusely and requested to stop somewhere safe so we don't block traffic behind us.

The lady got down and assessed the damage, minor scratches to her paintwork but my front bumper was dented. She said it's ok but I volunteered to pay and gave her my number.

2 hours later, while I was having my facial done, I received 4 missed calls from her, then came a message: Repair RM120, pls pay o/wise I'd have to make police report.

Kinda pissed me, I sincerely wanted to pay her, she needn't threaten me w a police report. I could have ignored her as I don't think there was grounds to make a police report. She didn't know my name or took any photo. Would the police be bothered w such remeh temeh claims ?

She'd probably think I was scooting off when I didn't pick up her call.

Me, The Medicine Man

Been feeling under the weather lately. Stressed or dunno what.. I can't exactly pinpoint out. Not sleeping well and Amber's nightmares ain't helping either. I engaged a helper and things around the home have to change. Schedule need to be in placed, fridge needs to be stocked up, food labelled and house rules set in place.

I don't embrace change easily. In fact I hate changes especially nail biting ones, like engaging a new helper, changes in Amber's schedule or changes at work. It stressess me out !!!!

I had sleepless nights and the worst was after a few rounds of coffee from a nights out with friends. I stayed up till 3am .. typing out helpers schedule, dos and don'ts and house rules. Having made mistakes with my Cambodian maid before, this time I wanna set things right.

Sleepless nights + stress from re-organizing the household = Anxious Me !

My body was weak, vision blurred, mind blur and part of my face was numb. Hubs was worried about hypertension and quickly got my blood pressure checked from the home bp monitor.

Turns out.. I'm not hyper but have hypotension

and I googled.. classic symptoms of low blood pressure include :

Changes in mental status (difficulty concentrating, confusion) or a sense of "impending doom" or anxiety