Take a look at the picture below. On the left, taken last wk of Dec 08 and on the right, taken last week, ie 1st week of March 09. 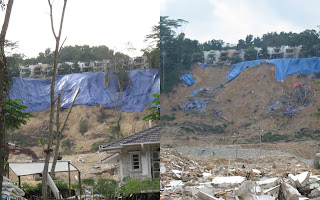 Just when the cabinet announced RM70million approved for repair works and strengthening slopes at site of disaster, residents there sighed a big relief. Although I don't live there and I am not an affected resident, above right is what I see NOW, at site and I AM WORRIED.

- the magic blue sheets washed away. Scary huh ? I know, it takes time to rebuild the slopes, but can't RM70million buy you some sort of protection to the current bare slopes ? Mind you, it's raining cats and dogs every other day. Untimely April showers ?

- hardly a handful of people manning the site, unlike the early weeks where meals were provided round the clock.

- check out PT's blog, what's priority to residents and affected homes, may not be priorities to others.

I hope something is done soon before tragedy strikes again. Lightning never stikes twice but what about landslides and landslips ?
Posted by coffeesncookies at 3/13/2009 11:21:00 AM