Our first birthday celebration was for my father. Took him for Japanese buffet at a friend's hotel, Oriental Crystal at Kajang. All of us enjoyed the dinner except the birthday boy, Japanese cuisine is not his cup of tea but we made up for it when second sis got him a Hazelnut Cheesecake from Secret Recipes. This is my favourite cake and hubs got one for me for my birthday too. It's a new cake and not as 'jelak' as the other cheesecakes, put it this way, it leaves you wanting for more after the first slice.

Amber has most fun during birthdays, getting excited in all the candle blowing sessions, just like her own birthday. 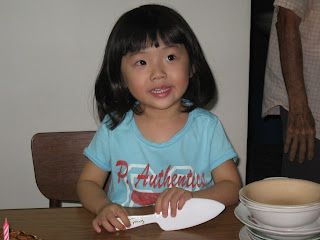 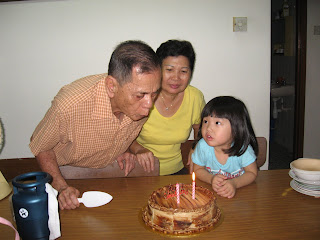 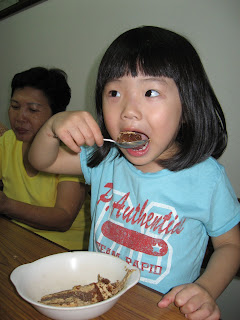 Then last Sunday, we attended another birthday party, the first kids party for Amber. It was Ei Leen's twins - Alysa and Alyna's 9th Birthday Party at the Selangor Shooting Club. I give Ei Leen thumbs up for the party she organizes are all full of activities. Starting with swimming in the morning, then lunch followed by games (Musical Chair, Who Shoots The Furthest and many many more). She orchestrates the games and keeps a close watch on the kids. When I left, I even saw a pail of water balloons, I think the kids are all going to go home wet and happy.

We left early as Amber is too young to join the older kids for games (and also because we were fully fed and sleepy.... Apart from games, every kids has a goody bag (chocolates, chewing gum, snacks, stationery) and shooting rocket (whatchamacallit - the soft styrofoam ones where kids push and shoot like a rocket), soap bubbles and water pistols. Every kid left the party with a smile on their face. 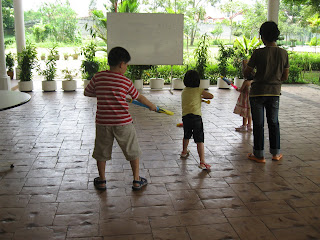 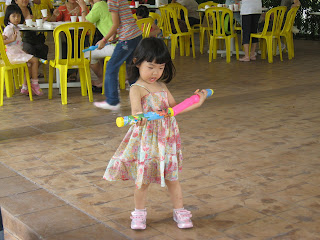 She does not know how to operate the shooting whatchamacallit toy ?? 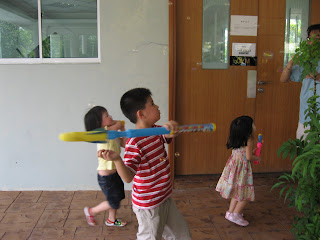 Amber filling up the water pistols with water from the pool. 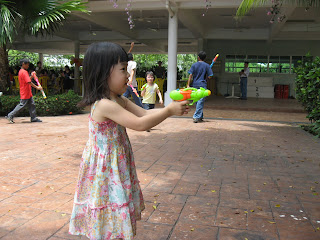 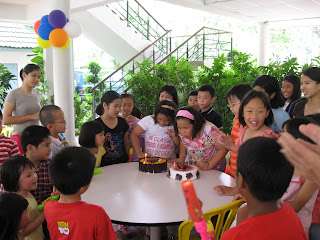