I baked marble cake yesterday. It was the spur of the moment baking as I wanted to try with normal wheat flour instead of self raising flour. 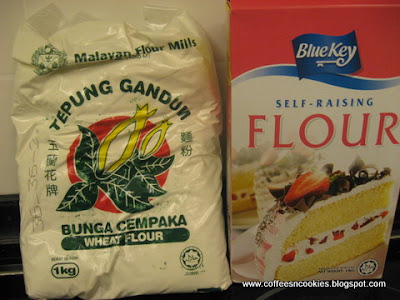 For 1 basic cake portion, ie 250gm of flour, I added 1 teaspoon (heaped) of Crescent Baking Powder, it works just as good as self raising flour. I would choose to wheat flour over self raising flour because
1. Wheat flour is much cheaper and easily available. During offers, it's half the price of self raising flour.
2. No need to stock so many kinds of flour (I have at least 7 types : rice, glutinous rice, wheat gluten, tapioca, corn, self raising, plain wheat.. .. .. .. crazy !!! running out of containers )-
3. Self raising flour, esp those mixed with some rice/corn flour spoils easily .. you'll see cobweb like insects in it , even with new packs. Never use without sifting.

Follow the basic buttercake recipe with the additional steps :Separate 1/3 of the batter and mix with the following :
2tablespoon cocoa powder
tsp icing sugar
1tablespoon milk 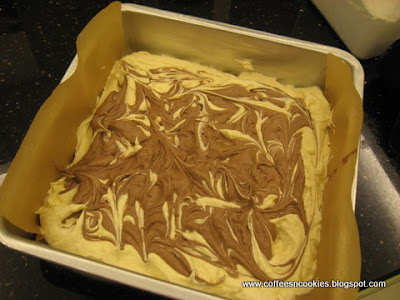 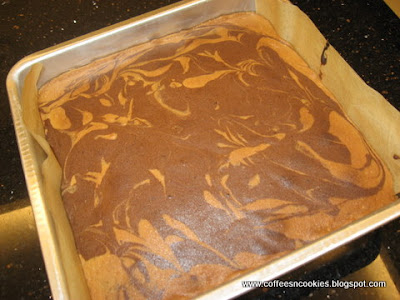 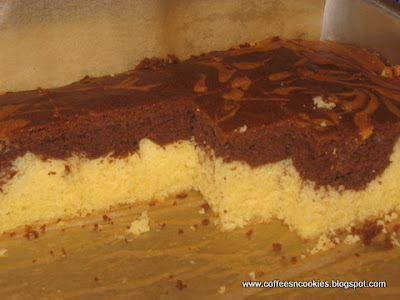 No marbling effect. Must find a better way to mix in the cocoa batter. Perhaps at next attempt, I should fold in butter and cocoa batter, one after another in alternate layer, any other ideas ?
Posted by coffeesncookies at 6/03/2009 09:41:00 AM