A Quick Trip to Malacca 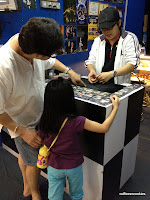 On the last day of school, the Friday before the school holidays, we took the afternoon off and headed to Malacca. We wanted to get there when there's no crowd, no traffic and no queues. Friday evenings at Malacca is the best choice, that is.. if you can afford half a day off. We had no plans for this holiday and taking half a day off isn't too much eh ?

We arrived Dataran Pahlawan, Malacca close to late afternoon and hubs wanted to check out a magic shop. He wants to learn magic. HE WANTS TO LEARN MAGIC !!! yeah.. he does. I left him there with Amber and strolled around Pahlawan on my own - bliss ! 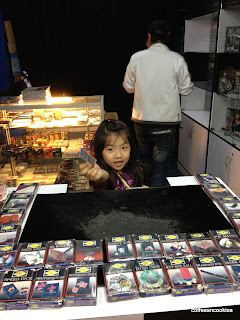 He spent close to 2 hours at the magic shop and we had to cancel initial our plans to the Coral Wonderland. The little one wasn't complaining as she's just as keen in magic as hubs.

He spent close to RM300 buying up some sort of magic package *rolls eyes*, I hope he puts to practice and not let it collect dust somewhere in the cupboard but hubs claims they have an outlet at Berjaya Times Square and he could go there for tutorials if he couldn't pass up some of the magic tricks. 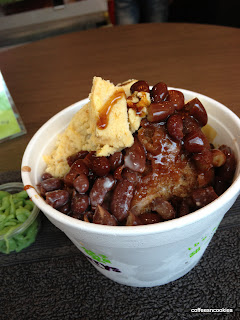 We stopped by Pinkberry's for desert after the magic session. They have moved to basement level, next to the fountain area but I didn't quite like the new place. There weren't any chairs for us and we had to sit by the fountain and their prices has gone up !

I can't remember how much I paid for the durian cendol but on their website, it's noted RM4 per bowl. I remembered paying more but anyhow, it's worth every sen. This has to be THE durian cendol, if you're looking for one in Malaca. Comes with cubes of frozen durian pulp and it's soo yummy! Unlike those famous durian cendol at Jonker's Street and other touristy places, this one comes with yellow frozen durian pulp, not some brownish gunk that leaves a strong pungent durian essence aftertaste. 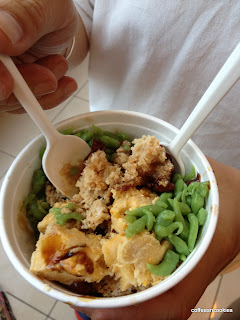 See the pulp ? I'd definitely go there again, just for the durian cendol and try other deserts. I was saving my tummy for crepes and only had their durian cendol. We met a guy there who was on his 4th bowl of desert - durian cendol, mango lo lo and few more. He came from Batu Pahat with his friends and every Friday evening, without fail, after work, they'll go to Pinkberry's followed by dinner in Malacca town. 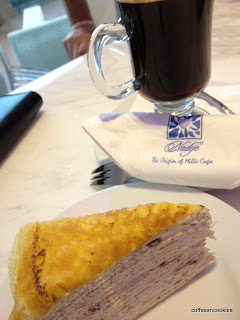 We crossed the road to Mahkota Parade to check out Nadeje's new cafe. I heard the queue can be crazy and long but it wasn't a weekend, we could easily get a table.

We had the rum and raisin and mango yogurt crepe.

I still like plain crepe or rum and raisin the best. No heavy creams for me, no thanks... 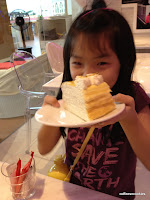 After paying a bomb for the crepes, I want to make m

Dinner was at Geographer Cafe. It was bad, very bad but it's my policy to write a bad review on any outlets. Maybe it was just bad timing and bad staff on the day but really... the food and service wasn't like before. It's wayyyyyyy off !!!
That was our short stopover at Malacca
Posted by coffeesncookies at 6/18/2012 05:01:00 PM Links to this post 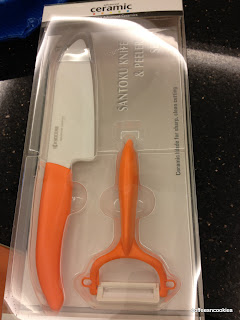 I've been eyeing on a ceramic knife for the longest time.
Anyone who knows me knows I'm obsessed with knives. I have a a couple of Zwillings, 2 Victorinox tomato knife - these are excellent for fruits as well, a Santouku stainless steel knife and a couple of Made in Thailand cheap Goldfish brand knives.

Been told never to drop the ceramic knife or you can kiss your hundreds of ringgits goodbye. A blogger mom recently cracked her Kyocera by cutting lemongrass. Who would have thought a mere serai (lemongrass) can crack up a ceramic ? I have to be more careful and never be forceful with the Kyocera.

Isetan had an offer for Kyocera knife and peeler during it's opening at new outlet at 1Utama recently. The offer was RM159 for the santoku knife and peeler but I was eyeing only on the knife.

Annie's husband was kind enough to get it during the pre-opening. He had to make a minimum purchase of RM100 storewide before purchasing this item. Another colleague also got me a set but I sold it to Jaclyn. 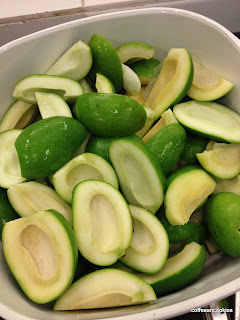 I tried slicing sour mangoes with my new ceramic knife, except for the slight resistance when slicing theough the seed, slicing is so effortless.

I also tried slicing a Dole pineapple with the knife. Easy peasy, glided through, like peeling a mango and guess what ??? The sliced pineapples reeked less juice and the cuts were much neater.

Never Ask What A Kid Wants For Dinner

One Saturday, hubs was away for his CPD points training. It was just me and Amber, we visited Barb in the morning, went home, had lunch, ,sent her for gymnastics and back.

It was a whole day out for me and I didn't feel like preparing dinner, even though I have a helper.

I asked Amber what she would like to have for dinner.

Nooo... no Renaissance Hotel. Our hotel card expired and we're not going to pay full price for dining.


What about the hotel near KLCC? The one very nice wan.. with a big piano ? Their white chocolate very nice !

On Monday night, she said  :

Mummy.. can you stay home tomorrow ?
Why ?
Because it's a special day..
the planet is going into the moon
I love you and I want you to see it.

On June 5, Venus will cross the sun, a phenomenon that occurs in 117 years and she doesn't want me to miss this special moment. She heard it from kakak and wants us all to watch it together.

I'm sorry but mummy have to work and I did warn her NOT to watch anything in the sky. I'll show her pictures and photos from the newspapers or internet.
Posted by coffeesncookies at 6/06/2012 09:47:00 AM Links to this post 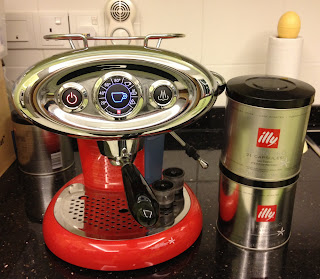 We're both coffee lovers. We met over coffee, talked over coffee and ran a cafe together before we tied the knots.

He even purchased a manual Gaggia machine with a separate coffee grinder and vacuum pots to store the beans but the hassle of washing up, descaling and calibrating the machine wore us out.

We've patronized SFX almost every other day including weekends and that, burnt a big hole in our pocket, not to mention time spent in the cafes idling.

Hubs came across a coffee machine at Espressamente Illy - Pavilion when he took the side entrance in to the cafe from the elevator area. We never noticed any espresso machines after months of patronizing.

The barista was there to give us samples and explained to us the convenience of capsule machines. No maintenance needed, just top up water and clean the steam vent (only if used for steaming milk).. There's 3 choice of capsules.. light roast, dark roast and decaffeneited - maybe more.. but we only take dark roast and that, costs us RM2.70 per pop. After few samples. . . we were awed  ... and sold...

Walked away with 2 machines... one for the office and another for home..

No regrets... it looks great in my kitchen and I could whip out hot coffee or latte anytime of the day.

This is a good buy and do check it out at http://www.espressamenteilly.com.my/.

There's no shortcut in learning Mandarin 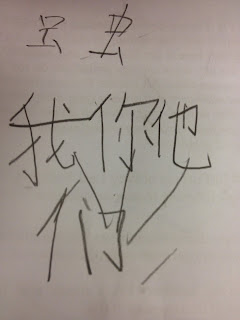 We started her on Mandarin tuition. Call me a kiasu mom but I'm not confident she can pull through her standard 1 without me pulling some hair.

I admit being slack on her Mandarin. Her previous kindy covered only 1 Mandarin subject and adding on, her teachers were always part time and temporary. I have not met or seen her Mandarin teacher. .. and when kindie ended in 2011, the kids did not complete their Mandarin books.

We've placed her in a Mandarin centric kindie this year. Last attempt to brush up her huawen before she goes to Standard 1. Since she's a newbie, she's placed in a class of newbies.. The kindie has 3 class for 6 year olds.. 1 for follow up kids whose well versed in Mandarin , 1 for follow up kids who is not-so well versed and needs brushing up and 1 for newbies. Follow-up class are for kids who have been with the kindie since 4 or 5 years old

Her newbie class consists of 2 Chinese girls, 4 Koreans and the rest, mixed. Teacher had to speak to them in English since the kids Mandarin are just very elementary.
We tried requesting her to be placed in the advanced class for follow-up kids but she failed the assessment test. The principal thinks she's better off where she is now and we couldn't not agree with the teachers, so be it lah.. she'll have to start from scratch.

We engaged a home Mandarin tutor. Costs us a bomb but we think that's the only way to go. We're both bananas and can't help much but I do try and sit down with her to practise her writing and  ting xie that tutor sets for her every week. We had hair pulling moments like above.. when I tested her on  Ni Men, Wo Men, Ta Men, she had the cheek to write, Ni, Wo & Ta and ask me to read the Men below.. to be shared !!

This girl.. is going to have a hard time in Standard 1 if she don't take her studies seriously now.