Yesterday, I went over to The Star for a small prize giving ceremony by LamSoon, the sponsor for Knife Food Trail. It was a simple handover of prize by Mr James Ng, Product Manager of LamSoon to me, take picture and post on newspaper later.

Actually, my picture was to be attached to the winning entry but due to some technical glitches, the article came out before the prize giving ceremony. Sam Cheong, the Chief Reporter of Star Metro called to apologize. He's a nice person to talk to and to me, the prize is more important lah.
Here's what I won : 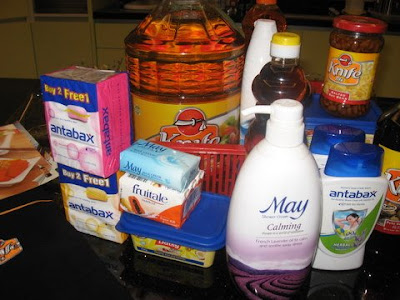 We only know Sam as the cherubic specky guy by the caricature drawing in Star Metro's Food Trail. I was keen to meet him in person. While hubs and I waited at the guest lounge, we looked at everyone who walked in and guessed Is This Sam ? Yes ? No ? hahahahaha !!! but when Sam walked in, it was unmistakably HIM although he looks different from the caricature. I think he's much younger in person.

I asked permission to post his photo in my blog and he obliged, so here's a small photo of Sam and me : 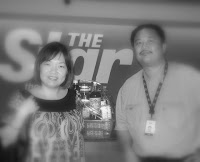 Thank you Sam ! Thank you James !