Saturday, we went for a seafood expedition to Port Klang. Our guide, 'teh-si-peng' lives in Kota Kemuning and we made plans to meet at his house and move from there on. Hubs and I are not familiar with Port Klang, the roads are kinda dark with lots of unexpected bumps and humps. Although we had GPS with us, Collin was the bestest GPS ! He'll alert us on sharp humps to look out for.

He gave us a few choices, Chinese seafood, Malay seafood, seafood with toddy and a famous lala place. Hubs chose Chinese (he'll go for anything porky !!) and we went to Bagan Hailam. I remember vaguely about 10 years ago, going there for barbecued crabs with my bunch of girlfriends but this time I didn't see any bbqs.

Bagan Hailam restaurant is stretched out to the sea, you'll have to pass through a small Hainanese community comprising of about 8-10 houses sitting on planks before you finally reach the restaurant.

We were there around 8pm and the tide was a tad high. We could see water all around us but it looked 'black'. I was extra careful with Amber. We told her if she'd to play near the railings and fall, nobody will save her coz we don't know how to swim .. :) 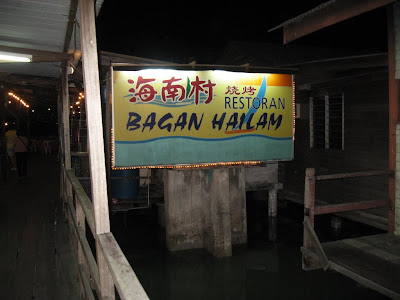 The view was kinda nice, overlooking the port and seafront but at 8pm, we can't see much. 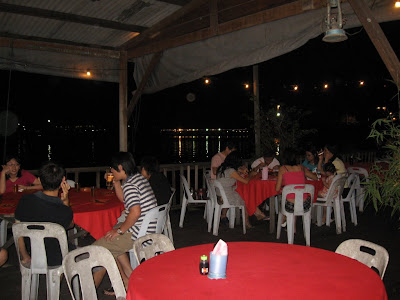 Upon reaching the restaurant .. 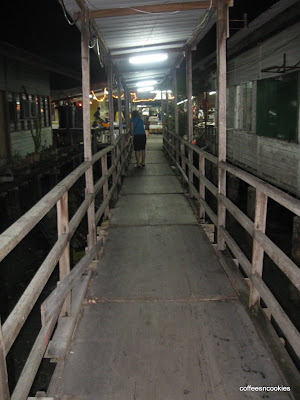 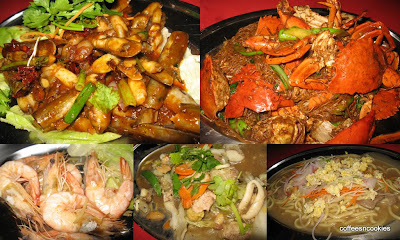 Kam heong bamboo clams, Crabs with mihun, Hailam noodles,
Hailam mixed vege and steamed prawns (pak cheok har)
All was good but we made a mistake with pak cheok har. It's not fresh live prawn (as with most pak cheok har ) but they served us sea prawns which is not fresh from the aquarium but still, it was very fresh.
The best dish was crab mihun ! Our total bill came up to RM150 for 5 of us. Quite a fair deal don't you think ?
As if dinner wasn't good enough, Collin kept hinting us to try another lala soup place... will blog about it later...