Did anyone realise this yesterday. Unlike last years petrol price hike, there wasn't any front page announcement this time.

Well, he waited till the 1st to fill up his tank coz we'll get a 5% rebate from CIMB Master.
The govt announced 2 types of petrol from Sep 1 onwards. Ron 95 and Ron 97

Our mechanics suggested Ron07 for our car, afterall the price difference isn't much.
Hubs tik-tik-tak-tak his calculator over the weekend and waited till Tuesday to pump, with a 5% discount, it's still cheaper than pumping on 31st at the old rate of RM1.80 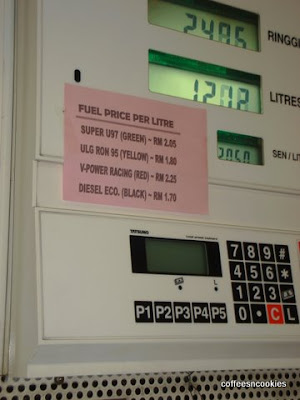