Over the long weekend last week, I was feeling a little bit 'rajin', wake up early, well not that early, slightly past 8am but the hubs and Amber woke up late and that leaves me lots of peace and time in the kitchen to prepare a sumptious breakfast. Hubs brother was with us too and that made the effort worthwhile.

I was inspired by the breakfast I had at Fitfor2, Bangsar Village 2 one Sunday morning with mamapumpkin and Annie Q. I thought it was the best breakfast ever, scrumptious toast, fresh coffee, tangy fresh orange juice and everything else nice and warm.

So, rajin-rajin, I tried my hand at 'American Breakfast' ala .. .homestyle with whatever I had in my kitchen : 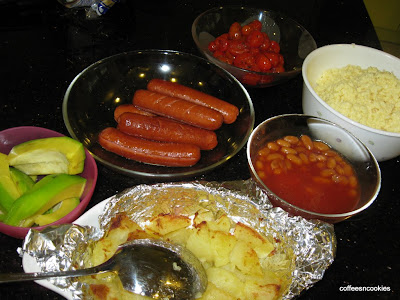 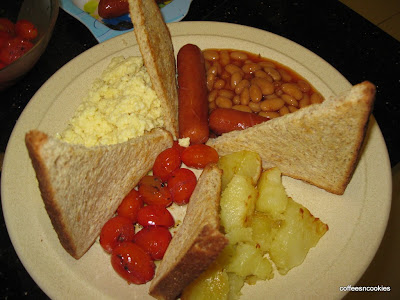 Attempting to make it look nice, I had the toast standing. Hubs reason was the toast won't get soggy so fast. This is hubs and BIL's portion 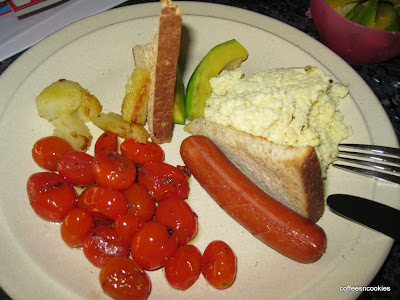 Less carbs, more tomatoes and 1 sausage. I'm not a fan of sausages !

Nice ? ... and I forgot to take pics of the pot of English tea and orange juice. Haih... otherwise even nicer (perasan betul) !!!

My fav item on the breakfast platter is the sauteed cherry tomatoes. So sweet and succulent. All I did was drizzle some olive oil on a non stick pan, slip in the tomatoes and saute with lids closed for couple of minutes and sprinkle some mixed herbs.

Going back to the sausages, I got them at Isetan pork and cold meat section. They have the widest and freshest range of cold meat. I was asking the assistant what's the difference between sausage and frankfurter ??? She looked at me blank and answered : Pork or Chicken ???? Haishh.. I said never mind and just walked away, sniggling. That's the kinda service from our local supermarkets now, most of them hire foreigners and I should not set my expectations high on them.
Posted by coffeesncookies at 6/03/2010 02:17:00 PM