We were back to hubs hometown over the weekend for MIL's bday celebration. Tampin is a bustling small town. Over the years of being married to a Tampin man, I've seen the town transform. When I first came to Tampin, there's only KFC and Pizza Hut. Now, there's Giant, Secret Recipe, Guardian Pharmacy and more progressing soon. Even then, our favourite haunts are the mamaks and roti canais (morning, afternoon and late night supper). You know how it's like in small towns, where everybody knows your name. Just sit down for a cuppa teh tarik and 5 minutes later, someone you know will happen to pass by join you, another 5 minutes, another friend or acquaintance will come along and join us. 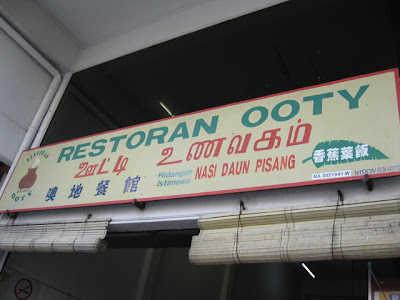 Restoran Ooty at Jalan Besar is our favourite roti canai and teh tarik haunt at mornings and evenings. The owner, Mr Chinniah Govindasamy passed away from heart attack a week ago. Hubs and his family will miss him dearly. Nevertheless, we are still supporters of Ooty, rain or shine, without fail, BIL will have his cuppa there. 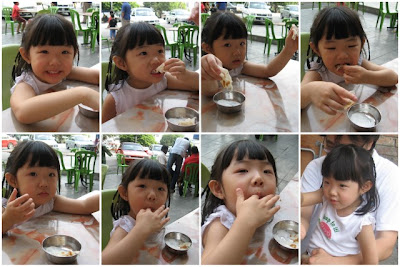 Hubs and I had bfast and I was almost finishing before I remembered to take some pictures. Amber enjoys her roti canai with coarse sugar. Ask her what drink she wants, she'll answer very loudly : TEH TARIK !!! *sigh ! she's starting young!*


I like to walk along Jalan Besar, lots of stuff to see and shop. You know those small stationery shops ? Displaying of toys, books and snacks along the walkway ? The little one gets busy. We allowed her to choose ONE item ONLY and she gets busy... 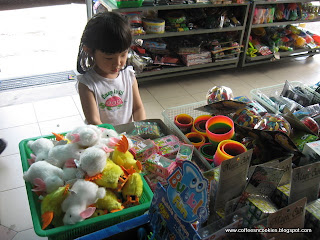 Everything also want.... but we stick to ONE only... 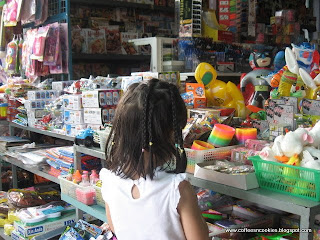 and guess what she chose ? 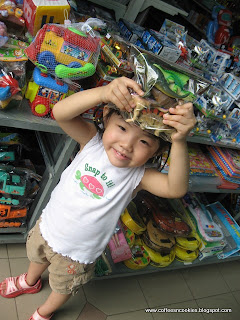 I had a little scary episode, Amber was scratching her eyes, non stop, I fed her lunch, rushing so we could make it to Tesco Malacca in the afternoon. I delayed her shower and while showering, I noticed her eyes got very swollen! I could see jelly like substance in her inner eye lid. I panicked, quickly dressed her up and rushed to the clinic opposite the house. Hubs was still showering.

I don't know why but when Amber saw the doctor, she cried like a chicken being slaughtered !
She's quite friendly with doctors but not this one. This is her second visit to this doctor and both visits also 'dramatic. I tried to hold her down but with all her 14kg might, she kicked me, doctor and nurse away. In the midst of rushing, I forgot to put on her underwear. .. ha ha ha ha... the nurses quickly pulled her skirt down. I called hubs to quickly drop everything and come over.
With hubs around, we were in better control of Amber. All 5 of us (doc, hubs, me, 2 kakak nurse) put her down to the bed and forced her to open her eyes for doctor to see. Hubs said : If you don't open your eyes, we are leaving you here.. ALONE ! Wah.. she quickly responded.
Doc said it was just some allergy probably from dustmites, and rubbed her eye too excessively. He prescribed Fusithalmic, an antibiotic for the eye and put the drops on Amber and it subsided within hours. Luckily and we made it to Tesco Malacca for kiddies ride and for MIL's dinner celebration.


Annie suggested I wipe her eyes with warm salt water instead. Salt water is saline and I think I shall do that. My little girl has all sorts of steroid creams : Elomet, Fucidin, Fucicort, Tobradex and Fusithalmic. I really have to cut down using steroid applications on her. She's only 3 years old and topical steroid applications are damaging when used long term.

Before we left, we had a cake cutting session for mil. The cake ? Hazelnut again, from Secret Recipe. Guess this will be in the list until all of us gets tired of it. 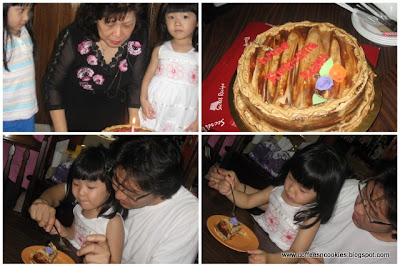 Amber polishes of the cream while hubs had the cake.
We quickly rushed back to KL and attended Annie's birthday party. Amber was really excited, she knows there'll be Batman and Spiderman cakes. It was fun to finally meet up with Annie, Jacs, Laundryamah and Barbara. Thanks Annie for inviting us. Can't wait for Annie to blog on her big bento project for her boys birthday !
Oh what a weekend it was, the little fart was very happy !
Posted by coffeesncookies at 5/25/2009 04:10:00 PM