I've been having a string of bad tenants lately. First was a Malay lady who promised heaven and earth (actually she only promised to pay monthly rental promptly, keep telling me "mou man tai") but when the tenancy came into force, trouble started on the second month. I have to read her incessant apologetic email, listen to her grouses, her husbands business issues, school reopening, Hari Raya, Hari Raya Haji and relative sick, passed away, and a WHOLE LONG LIST of excuses for not paying rental on time. She was always 2 months back and always manage to cook up some story when rental is due and I must give her credit for ingenuity. I always believed her and many times also shout at her "I don't want to listen to your story, I have to pay bank instalments and do you think the bank will listen to me ?".

Then came CNY, I thought, wuah... my turn to come up with a reason for needing money and wanting my rental in on time or even 1 month delay is fine. Before I can brew up my reasons, she disappeared ! Oh gawd !!!!!!!!!!

Then, another tenant came, 2 Chinese guys from Yong Peng, Johor. They seemed to need the place quite urgently and only for a year. I agreed and they seemed like hardworking and nice people. They only stay on weekdays and weekends, they'll go back to their family in Johor.

They smoke, but was very courteous and friendly when I met with them. I also saw a huge 52 inch tv on my living room, which was purportedly for drawings. These 2 guys are 'interior designers' on a project in KL, lasting for a year. They didn't request much, just a basic apartment and air cond. In fact, they a/c up the whole unit. Now, I have 4 ac units in a 3 bedroom condo.

Their first month rental was due on April 7. I waited till April 17 to call them. Give them a chance, I thought and in meantime, checking my Maybank account periodically, hoping to see my rental in. I could not get them on their mobiles, the calls went to the voicemail. I tried for couple of weeks and asked the agent to check on my unit. The place looked fine, a/c unit still around.

I assumed they could be overseas.. and kept calling few days later.
Then I panicked a bit, maybe he was involved in an accident ? Could he be dead ? How could I check ? Heck ! I could not do anything when I all have is his copy of IC with address at Yong Peng. It was too early to apply for court order, he has defaulted only for a month.

Then one evening, my agent checked the place and saw many copies of IC of 'Er Chan Loong' pasted on my condo grills and walls with $$ and $$ drawn on the walls.

Work of an Ah Long !!! The ruthless moneylenders came knocking on my condo..

So, what should I do ? I checked with a lawyer and he advised me to make police report.

We went to Balai Polis, waited for couple of hours to lodge our report and waited again to see the Sargeant. His advise to us was to get a Court Order instead. Police has not right to barge in the apartment. He can accompany us to break in with a Court Order.

And to the Mahkamah, we went, the following day. Oh I so hate the tenant ! Cursing him to choke on every grain of rice he eats ! Wasting so much time and don't know what that fella is up to or where he has gone !

Waited at Mahkamah for our turn and somebody attended to us. He said :
- we can't apply for Court Order (Perintah Mahkamah) on our own
- we have to get the application in by a lawyer
- Application has to be heard by a judge before a Perintah Mahkamah is released
- and this will take time, perhaps a few weeks ???

Then he kindly told us what to do, before applying for a Court Order :

- get a locksmith to break in to the place
- get a witness, preferbly the property manager to witness
- if there's nothing valuable in the apartment, ie clothing and such,throw it away and deem the tenant as left the property without notice
- if there's valuable items in the property, lock up the place properly and apply for Court Order.
- take photos.

My guts tells me there's nothing much left in the unit but I was secretly hoping he left the 52 ince tv behind though... LOL !!!

And so, we had to get a locksmith and property manager to the unit. I was really frustrated, having to spend my whole day attending to this matter. Luckily hubs was with me, he speaks excellent Bahasa and represented me to talk to the Mahkamah people. 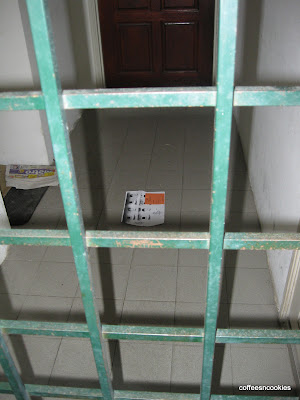 My agent threw away the copies of IC pasted on the unit but there's one more left on the floor. 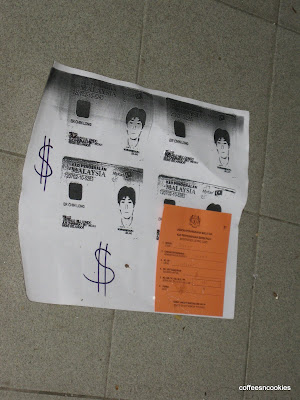 Er Chan Loong !!! Darn ! You registered your IC with my condo address and absconded ! 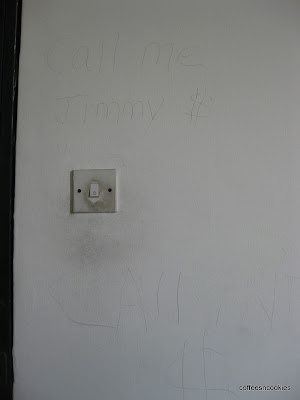 Jimmy! Jimmy ! It ain't nice to graffiti on walls you know! Didn't your mom tell you that ???? 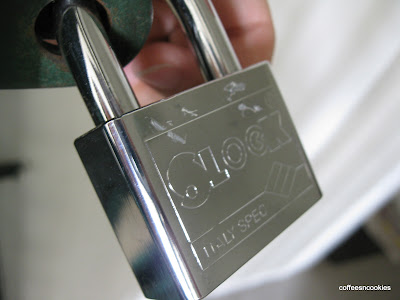 Blardy nuisance. Lock up the place with an Italian lock, a very difficult and expensive lock to pick ! 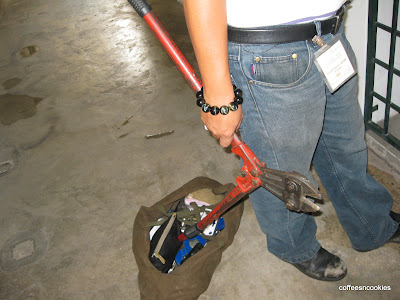 The locksmith's gadgets. The darn lock was too hard to break and he had to cut the grills to break in. 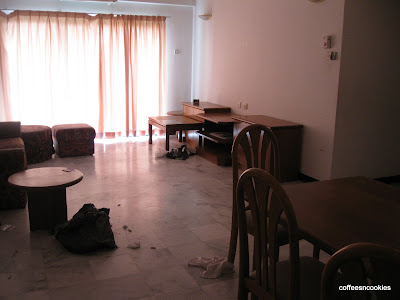 The unit. 'Kering kontang'. Darn him, I was hoping he left tv behind but apparently he already planned this and took off with everything. Left nothing except garbage and leftover food. A loaf of Gardenia bread in the kitchen was dated 2 April 2010 and the newspapers was dated 31 March 2010.
We concluded he left the place sometime around 31 March and with all the lights switched ON !
He left me 2 souvenirs of electric bill on RM400 and water bill of RM200
Darn him ! Can't he be nice and not lock up the place when he leaves instead.
My run with bad tenants.. I hope this will be the LAST.
Posted by coffeesncookies at 5/22/2010 11:21:00 AM