We went to Petaling Street last Saturday. Hubs, who's born in the year of rabbit and me, the rat, both our signs clashed with the Grand Duke Of Jupiter (Tai Sui Yeh). We went to the Sin Sze Si Ya Temple or more commonly known as the Yap Ah Loy Temple, to get our blessings and protection from the Grand Duke Of Jupiter. This year, the four zodiac animals that clashes with the Grand Duke is rabbit, rat, horse and rooster.
Believe or not, I can't say much but we hope getting his blessings will lessen any misfortune that'll fall on us. I remember 9 yrs ago, my zodiac sign, rat,  also clashes with the Grand Duke but i did not go to the temple to get his blessings and I had a series of misfortune, I had a car accidenta and the driver scooted away, I was ill for months hubs had an eye operation. It could be merely conincidence but since then, we made it a point to seek out the Grand Duke's blessing and also to pray for safety of our families.
We had a major do at the temple, the prayers took around 90 minutes. We are quite 'banana skinned' when it comes to prayers but they had many staff there guiding us on the protocols. My only minor issue was Amber tagging along, wanting to do everything that we do, only she's too short to look out for burning joss sticks ! I had forgotten to take pictures in the temple. bah!!!   We were given some mandarin oranges, tea and biscuits to consume and flowers for bathing. With that, the family is blessed :)
We took the opportunity shop around Petaling Street and the sounds of 'dong dong doong dooong chiang !!!'  led us to the lion dance performance at another temple up the road. How lucky to catch a lion dance performance before the New Year : 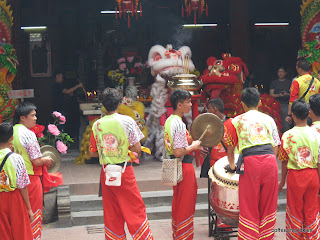 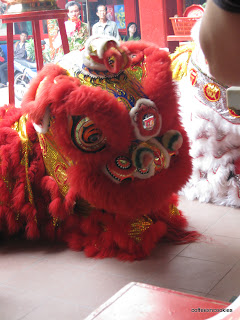 I like the guy on the drums... Ada gaya betul ! 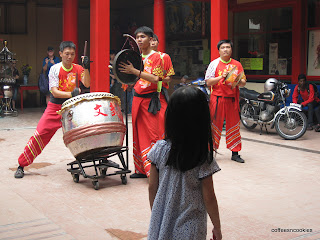 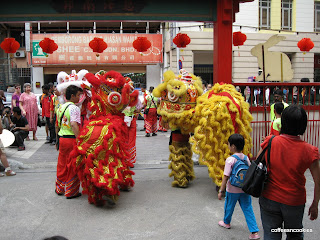 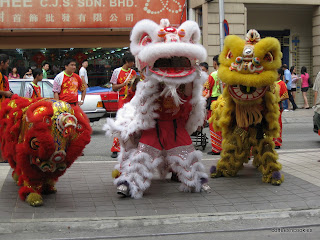 We followed the troupe down the heart of Petaling Street and lucky Amber, she has the best view on daddy's shoulder : 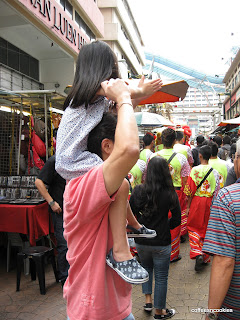 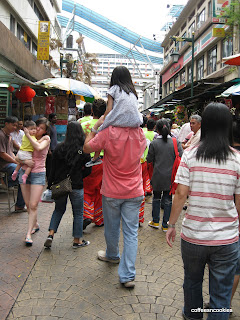 Then we had lunch at Koon Kee Wantan Mee, Jalan Hang Lekiu. Amber could not have the egg noodles and I ordered porridge from Hon Kee, next door, they were allowed to serve the porridge at Koon Kee using disposable wares. Amber had pork porridge and those spare parts were for hubs and us.
We skipped breakfast and was famished. We ordered megaworks... large noodle with charsiu and wantan and an extra plate of mushroom chicken feet. All my favourites. Famished till I forgot about snapping pics again. I only had the porridge to show : 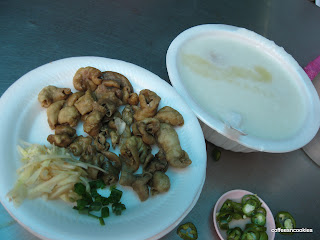 We too a stroll around Petaling Street, catching the sights and sounds of a place so touris-ty and yet so synonymous to celebrating CNY in Malaysia.
fruits 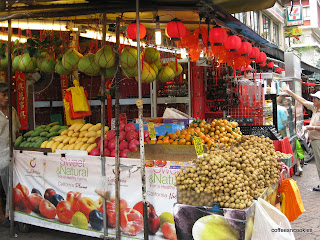 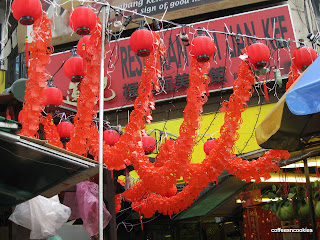 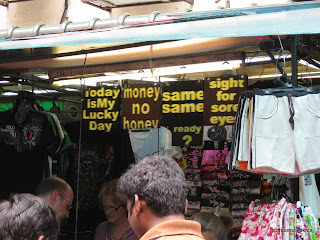 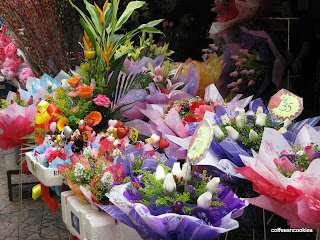 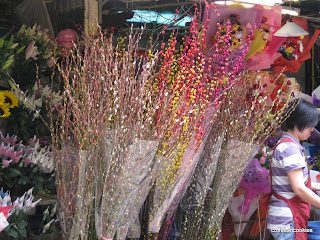 There is another story on pussy willows. We used to have a pot at home each CNY but was told pussy willow in chinese - 'ngan lau' sounds like tears - ngan lui.. and some calls it's 'mui far'  , sounds like wilting flowers - not properous sounding plant and that was the last year we had those at home. Frankly speaking, I prefer fresh potted plants instead.
Then we went to Pavilion and caught  lion dance performance #2. How lucky !!! 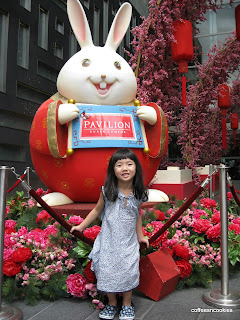 This one requires more skills.. lion dance on stilts.. amazing ! 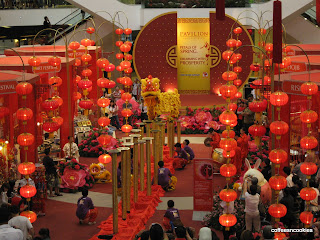 The lion went around greeting the shoppers 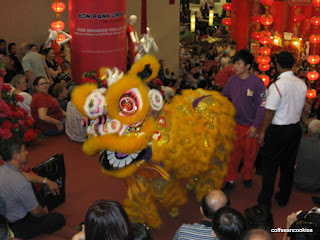 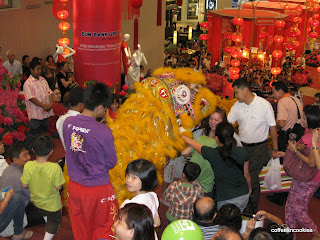 And gave out lucky mandarin oranges. Lucky Amber received one lucky orange from the lion ! 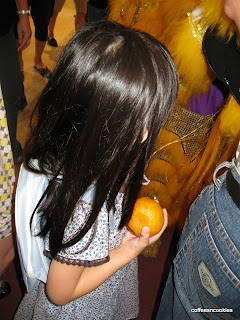 She enjoyed the mandarin orange  by sucking the juice from each wedge. She doesn't like the pulp. 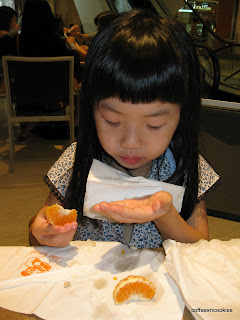