This CNY, we took a long break. With the addition of FT Day, we took almost a week off.. *luxury* for us, being in the kind of work we do, taking a day off is almost impossible.
We took off for hubs hometown on Monday night. 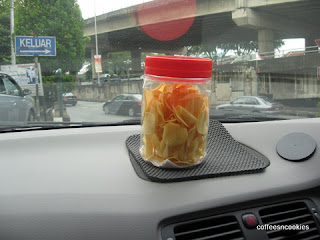 See the ngaku chips ? I got these from the Imbi market just before we left for RM10 a jar when Amber insisted she wants ngaku chips. Although deep fried.  I believe it's healther than potato chips, at least ngaku is additive and preservative free. We happily munched one jar during our journey back hometown.
The drive was smooth, mild traffic but once we hit Seremban, the wind was unusually strong, hubs had to go slow as he could feel the car 'floating'. A very strange phenomenon and he reminded me to take some pics : 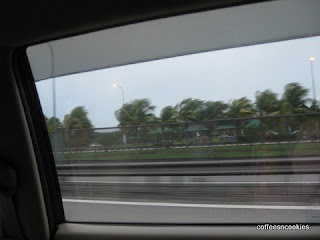 The in laws ordered noodles for us and we tucked in to hot 'longkang mee' or 'loongjiang mien', a Tampin famous delicacy. Longkang sounds awful but I think it got it's moniker because the noodle stall was set up next to a longkang or drain in Tampin and it got very popular, so thereon, it's known as longkang mee. 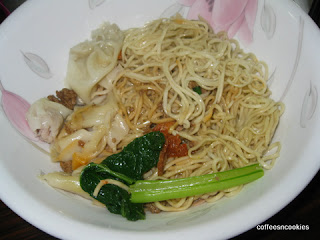 A simple dry springy homemade wantan noodle with char siu.
Throughout the night, the wind was ferocious and we abandoned our supper plans to go mamak for teh tarik. We went to bed early and got up early the following day (FT Day) and went down to Malacca for jalan jalan cari makan.
First stop was chicken rice balls at Jalan Tun Sri Lanang. This place is a sellout. Chicken rice balls for breakfast ! No kidding. We were there at 9.30am and it was fully sold by 10.30am !! 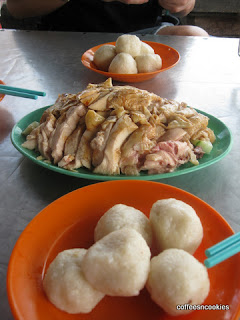 4 portions of rice and half a chicken cost us RM19.. Cheap and good :)
Then we did a little shopping at Jonker St.. a windy and cooling morning. 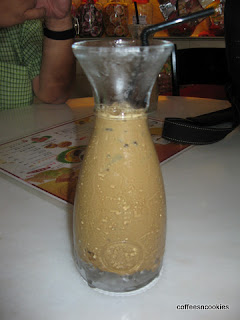 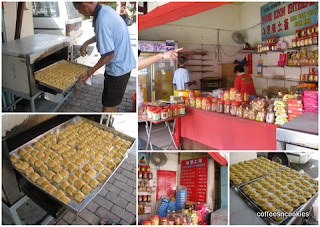 Sniffed some pineapple tarts. I refused to buy any as we have loads of cookies back home .. 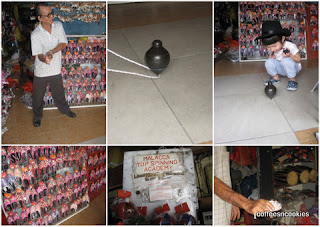 Came across a shop selling spinning top. Mr Wong, teaches spinning in 5 minutes, he gave up on us after more than 15 minutes. He also has beautiful beaded shoes but alas, none fits Amber. 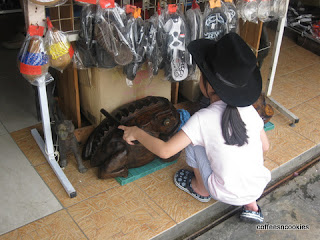 We bought a croaking frog from him instead. 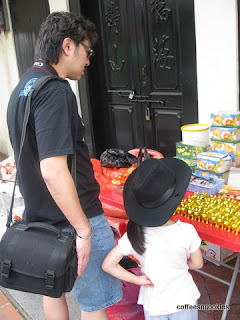 Then we bought some sparklers and pop-pops for the girls. One whole box  of pop-pops !

We had lunch at Geographer's Cafe. I think this is our 4th or 5th visit in less than 2 months just because this is the only decent spot at Jonker's Street where hubs can get a good cuppa coffee. They serve Lavazza coffee.
Posted by coffeesncookies at 2/10/2011 04:29:00 PM