I've been reading so much about Barbara's and Annie's visit to Malacca, I was itching to go Malacca again
After being married almost 10 years to hubs and going to Malacca everytime we visit the inlaws, which is like almost 10 times in a year, we never get to go places like Jonker Street and absorb all things historical about Malacca. We'd just go to the malls where the kids can play and adults shop, have dinner and then back to Tampin.
We had plenty of time after Amber's visit to Dr Wong's and I pestered hubs to detour to Malacca. The mild weather was perfect to stroll the streets of old Malacca, stopping by for souvenir shopping and cendol, along the way.
We parked our car a walking distance away from Jonker Street for only RM2 per day, a guarded car park. Very reasonable and safe place to park. Parking is never a problem if you don't wait and turn into Jonker St where roads are narrow and traffic is horrific especially on weekends and public holidays. 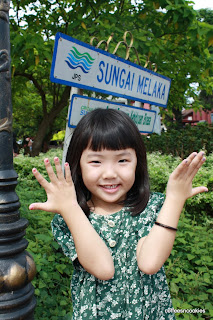 We stopped by the museum and the little one was pestering Papa to bring her in to the museum when hubs said Yeh Yeh (her grandpa) used to bring him in when he was a kid. Hubs and I, was more interested in cendol and we talked her out of visiting the museum. Maybe next time, Amber. 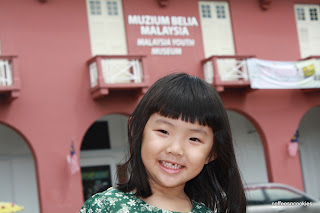 Then we took a stroll along the back of the shophouses which was fronting a river. We were surprise to come across many cafes and pubs. A few tourist was having beer, watching the river cruise go by and reading a good book. I likeee the idea of chilling out here. I think it was here that hubs fells in love with Malacca again and vow to be back, for a nights stopover. 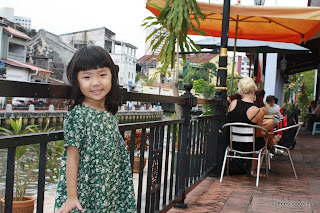 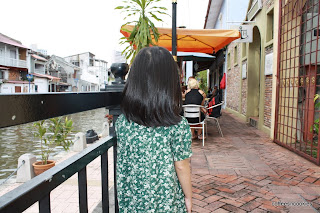 They kept the river clean I think it'll be nice to chill out here at night too. 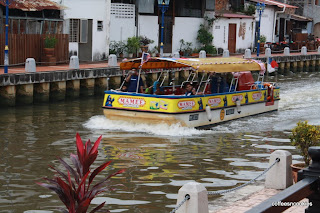 Amber kept pestering us to go for the river cruise and we had to walk quite a distance to get to the queue for the cruise. Again, we talked her out of it. .Cendol was more important! 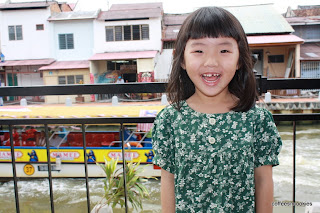 She was happy to take a pic with the river cruise passing by behind.. Kids.. if small stuff can make them happy, let's just leave it that way ya ? 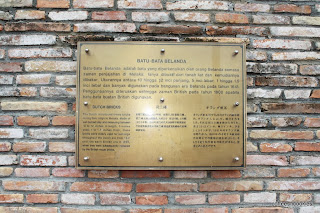 Walking along the riversides, we saw a mixture of  old 'antique' houses, some built with bricks from the Dutch era, like above, cafes, al fresco dining, tailors and others. Basically, a quaint mixture of old and new.
I peeped into the backyards of the shophouses. Many has been converted to cafes and eateries but there's still a few that's maintained as homes.  You'll find many with beautiful homes with courtyards facing the riverside. Hubs didn't take any pictures, it'll seem very intrusive to pop in our camera and take pics of somebody's courtyard right ?
Our first stop at Jonker Street was to look for cendol, hubs favourite. I'm not a cendol fan and had cravings for the iced coffee Annie and Barb said was sooooo good. We were too lazy to walk to Donald and Lily's for their cendol. 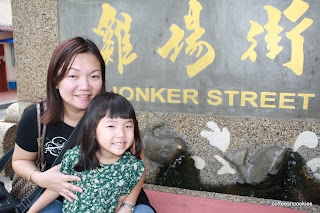 Hubs settled for cendol at San Shu Gong's Lao Qian Cafe where we could sit comfortably at the air conditioned cafe. 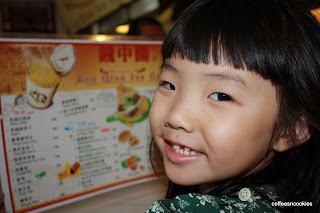 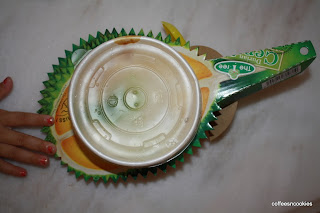 Hubs had their cendol in an unique durian holder which eventually became Amber's mask and then hat.
I had the ice coffee. Really slurpsss... Served in a icy chilled carafe with frozen chipped ice inside, this is sooo refreshing.  I must come back here again for this icy cold coffee... much better than cendol, in my opinion, that is. 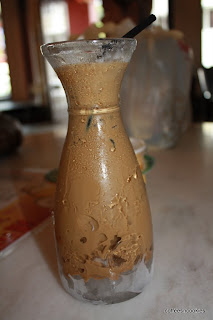 Refreshed and recharged, we were ready to tackle Jonker Street. We walked along the narrow streets, bought some souvenirs and I found my favourite souvenir shop that sells tops from Thailand - Mango of Furano, got Amber some knick knacks to play and I bumped to Chinnee. Of all places and of all co-incidences, I bumped to Chin Nee, a Malaccan living at KL, at Jonker Street. We looked at each other and passed each other without giving much thought until I saw her hubs and QQ and I called out to her.LOL !
Such a small world eh ?
We also came across this nostalgic printing house : 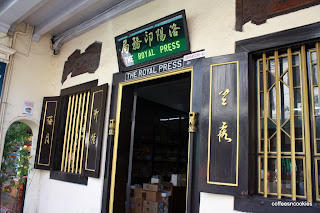 The Royal Press. FIL used to engage Royal Press to print matters for the family many years ago. Still standing tall today !
Coming up.. Peranakan Food !!
Posted by coffeesncookies at 9/21/2010 11:15:00 AM