My favourite pasta dish has to be Spaghetti Vongole. Although I do cook tomato based and cream based sauce for hubs but those I don't likee and don't eat much. I still prefer the simple olive oil and garlic based sauce.

Rachel asked me where to get clams and she wanted to cook clam soup for baby Philip. Not easy to find good clams, whatmore fresh ones. I've searched Ampang market, Imbi market and finally found a vege seller (yes, vege seller) at Ayer Panas market supplying fresh clams. Supply is not consistent, depending on luck (luck means stomach craving for clams = supply available). Actually it's quite seasonal too. You can forget about getting clams over festive seasons when the fishmongers rather do something more lucrative and catch bigger fishes too.

Well, so much for my clam supply stories, let's get cooking. I got 2 kgs of clam, hard shelled type, similiar to those served in Japanese restaurants.

To spit out the mud . I rinsed the clams, soaked in salt water and wheat flour and washing them in betweens for at least 3 times. However, I could not see much mud or dirt, the clams didn't spit much mud coz they were damn fresh !!! I placed them in chiller until cooking time. 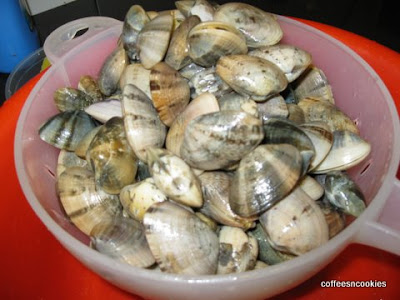 
Since I feel a bit 'rajin' that day, I precooked the clams first and removed half shell before frying them in boiled spaghetti. At least with this method, I don't have whole plate of clanging and dangling shells tying knots with spaghetti :) 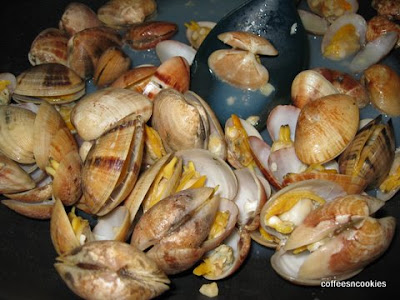 Sautee in garlic and olive oil, pour in a bowl of water. When clams open up, turn off fire. Do not overcook. 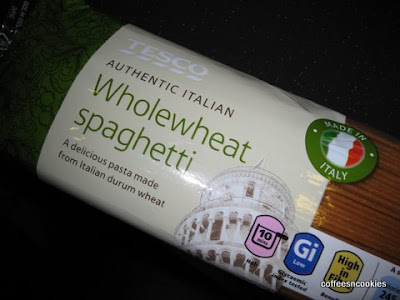 I used wholewhat spaghetti from Tesco. Brownish and not as al-dente as usual spaghetti but healthier. Low GI and high fiber. 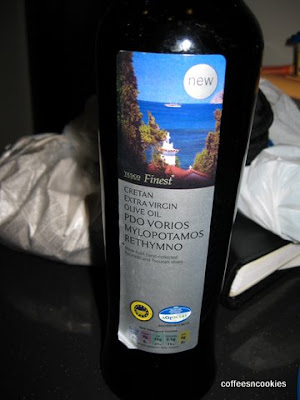 Extra Virgin Olive Oil. I reserve this as final dressing but I also use this to cook coz I've run out of the usual virgin olive oil. 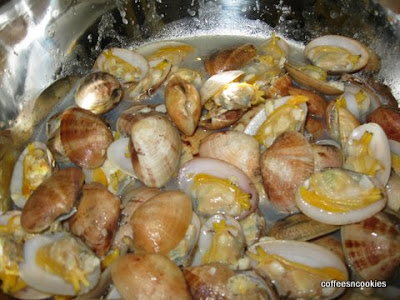 Clams, with the empty half shell discarded. All shell has meat.. YUMMMZZZ
Then, sautee garlic, quarter chicken stock cube (non msg), sprinkle of salt, chopped English parsley, then toss in boiled spaghetti and clams with some soup and chopped parsley, give it a good stir and it's ready to be served. 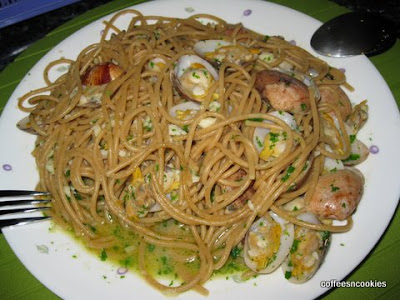 Pour in some extra virgin olive oil for flavour. Add some chilli padi with the garlic if you like it spicy.
Home cooking, cheap, good and healthy and have all the clams you want. Don't you think so ?
Posted by coffeesncookies at 10/20/2009 10:23:00 AM