Comforting Chow for Down Times

Hubs has been sick since last week. Started with fever, sore throat and the whole jazz. He's recovering now albeit tired and lethargic.

So, what would I cook for a sick baby ? 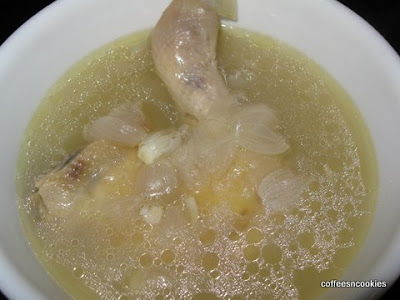 Chicken onion soup... Slow boil chicken with Thai shallots. So yummy and comforting, bound to make you let off 'gas', but hor.. the chinese sinseh hubs has been consulting said to avoid anything chicken, esp chicken soup. Apparently very 'chou for'. Hubs broke out in rashes after consuming his wife's chicken soup. LOL !
Anyway, this is the easiet chicken dish I can come up with in a jiffy. 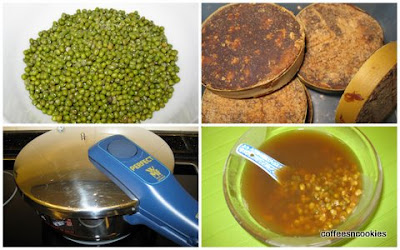 Then FIL suggested to him to take 'lek tau chui' , or mung bean desert instead. The Chinese doctor said the same. Mung beans is very 'detoxifying' and can red toxins very fast. So, it's been mung bean for desert every night. Pretty easy to dish up, except that it needs long boiling hours for the beans to soften and open up (hoi far). So, what did I do ? Chuck it to my pressure cooker lor.. Easy peasy !
one small bowl of beans + 3 piece of gula melaka + knot of pandan leaf + 5 bowls of water.
within 20 mins my mung bean desert is ready (+ another 10 mins for pressure to reduce). We had this 2 nights in a row and it's soooo comforting and helped us sleep well. No wonder I always see Hong Kong families having 'tong sui' after dinner, something we are not accustomed to here. 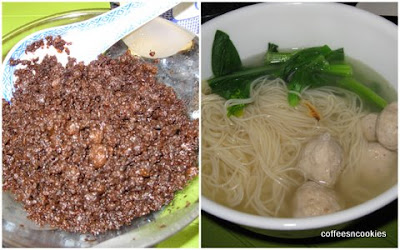 Then, yesterday, I cooked misua soup with choy sum and meatballs. Really a dish for the sick.
For me, I added minced meat (fried and fried till really dry and heavenly tasty). Hubs couldn't resist, he also added lots of minced meat to the soup.