Where to eat at Cameron Highlands - Restoran Tringkap

Dining at Camerons is a different experience altogether. The cool weather and anticipation of lots of walking, shopping and sight seeing really whets our appetite. Agnes told me to try Restoran Tringkap and it's famous black pepper talapia fish.

We took the Simpang Pulai route, passing by Kg Raja and few other small kampung-ships until the magical word 'Tringkap' appeared on the signboard. All eyes were alert, me, the driver, the passengers. We were looking for 'Restoran Tringkap'. Not too difficult, the moment we see signboards on Tringkap, we saw another sign to the right 'Restoran Tringkap' with an arrow pointing inwards to the right. 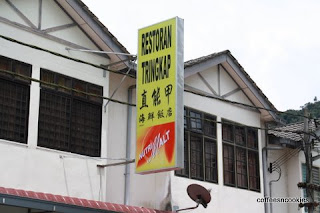 It is located off the main road but you'll see a big sign when you reach a school and market.

Do call if you have plans for dinner, especially if you are staying at Tanah Rata and it's quite a distance to Tringkap. The lady owner is very pleasant and that's one of the reasons why we came back here again when we left the highlands. Food is #1 and service comes a very close second. 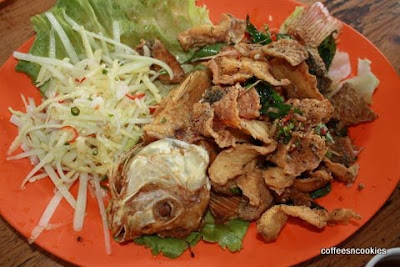 Their signature dish - black pepper talapia. Not to be missed. This is so good. My tummy is rumbling now, thinking of the talapia. Comes with a side dish of kerabu and it complements the crispy fish slices so well. 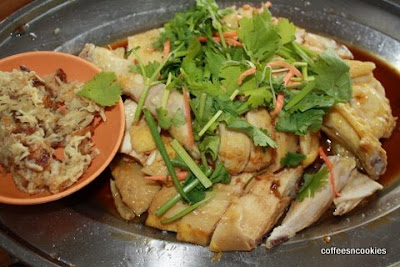 Steamed kampung chicken. I kept pestering hubs to order this. Highland and cold land bred chicken would be different from our KL kampung chicken.. don't you think so ? The lady owner told us she takes in young chicks, as in chicken n hen ok ??? *laughs*....  and she'll breed them for couple of weeks before sending them off to the kitchen for consumption (let's skip the slaughtering part, ok ??) We ordered half chicken and walloped everything. Oh yeah.. the ginger sauce is fab too. I walloped the minced ginger before hubs had a chance to take a second helping. 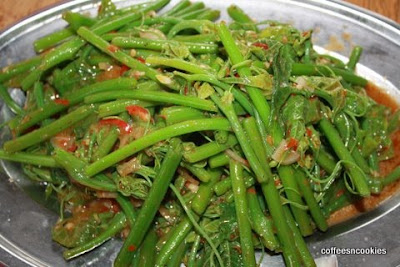 Belacan loong sou choy, dragon beard vege.The .We had quite a few of this dish at various restaurants at Camerons and RT's is ze best. Not spicy or oily but the vegetable is swimming in the creamy belacan sauce.
We ordered an extra large portion.

Restoran Tringkap is worth a try. Food is good and the see tau por is a very nice lady. Her sister in law grows her own vegetables and sometimes when harvest is plenty, they'll sell at their restaurant. We bought yellow cherry tomatoes from them and it's much more delish and cheaper than those bought at Brinchang night market.s

And.. I have a little story to tell about loong sou choy.. Back., 8 or 10 years ago, this vege was not popular at all. I was introduced to this vege by a good friend Josephine. Her parents run a vegetable farm at Camerons and she brought us to her family farm one day. She took a basket and we went to a slope part of the farm where chayote patch is and taught me how to pluck the leaves. I've been eating chayote (mou kwa) for years and didn't know the leaves were edible and delicious too. Those memories of Camerons with Josephine remains in my heart forever as Josephine, who is a year older than me, passed away in 2005 of cancer.
Posted by coffeesncookies at 8/25/2010 11:45:00 AM