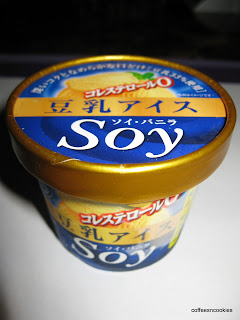 Finally, a tub of comfort food for her, and cheap too. Now, I'm on a vanilla soy hunt. Many outlets have run out of stock. I'll surely stock up some at home soon.
She's been taking 'approved' ice cream from :
Gelatomio -  only soy apple flavour
Gelatissimo - all 99% fat free sorbets. the 95% fat free sorbets are has slight milk content
New Zealand Naturals - all fruit sorbets.


I have to be very careful, not all fruit sorbets are dairy-free and egg-free. Once, a promoter at Mid Valley was giving out free gelato samples. I asked if there's milk and the guy claimed.. No ! No Milk ! Guarantee !
After Amber had sampled, he said.. no milk, only yogurt ! I so wanted to SMACK him with a spade. I have to be careful who I asks, some blank looks don't convince me but now I try to google on the product before I let her try.
Now, I've found a gem.. Shojikiya's soy vanilla.. tastes like the real thing. :)

On the fourth day of Christmas,
my true love sent to me
Four calling birds,
Three French hens,
Two turtle doves,
And a partridge in a pear tree.